An autumn in the Douro Valley 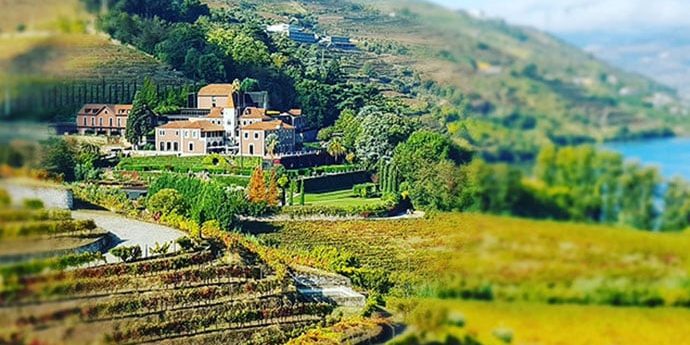 Would you believe it? With 26 million bottles purchased in 2017, the French are the world’s biggest consumers of Porto wines. And let it be remembered that the admirers of this fortified wine also contributed, indirectly, to its success! In the 17th century, when Jean-Baptiste Colbert, the French minister of finance, decided to impose a tax on the export of Bordeaux wines to Britain, the British began stocking up in Portugal instead… But in order to withstand such a long maritime journey, the “method” required some perfecting. And so “fortification” came into existence, a process by which eau de vie is added to the grapes in the wine to halt its fermentation. This process results in the round, sweetened wine that the French seem to appreciate so much.

Porto, gateway to the Douro

With harmonious warm colours and winding streets, the city of Porto stands facing the banks of Vila Nova de Gaia. Viewed from the docks, wine stores reign supreme. English and Scottish sounding names like Graham’s and Taylor’s recall the history of the city and its fortified wine. Take a trip to Graham’s cellars, set slightly apart from the tourist circuits, and don’t pass up on a visit of the storehouse, which ends with a tasting session.

Next stop: the Douro vineyards, the cradle of Porto.

Up the river and on to the vineyards

The Douro River, whose source is in Spain, has traced a wide, deep corridor right through the middle of an enchanting valley. Beginning at Vila Réal, the Douro Valley – a UNESCO world heritage site and vast paradise measuring 250,000 hectares – reveals its spectacular reliefs. Sculpted by man, the vineyard landscape is terraced. On this schist soil, the vines hold on for all they are worth to the slope, which is sometimes vertical. What amazing colours are to be found in autumn! From the panoramic viewpoints that punctuate the circuit – such as the Miradouro de Casal de Loivois above Pinhaõ – the wine-growing area covers the Douro Valley in green, golden and fiery strips.

In Pinhaõ, a wine-growing stronghold, one can also take a trip on an old barco rabelo, a flat-bottomed cargo boat that was formerly used to transport casks to Porto. From the river, the view of the facing vineyards and quintas (large manors set among the vineyards) is impressive! By car, don’t miss a climb to the heights of Pinhaõ, in the direction of Sabrosa, then Favaios. The most beautiful part of the landscape, however, can be found on leaving the village of Provesende, and in the direction of Gouvães do Douro, Covas do Douro and Gouvinhas. In these parts, the vines blend with the olive and lemon trees. The villages seem to nestle in a distant time… a picturesque sight!

Casa do Visconde de Chanceleiros exudes an air of 18th century manor life. Hidden amongst fertile land, the building is surrounded by vines, vegetable gardens and countless fruit trees. In all seasons, plants fill this site with ostentatious abundance. The family property, which cultivates 100 hectares of vines, is a sleeping beauty. Left in its original state, it has housed a succession of salons and boudoirs heated by tranquil fireplaces, and trinkets of assorted silverware. The bedrooms offer basic but cosy comfort, with Persian rugs adorning the tiled floors. On the walls, faces from the past watch over the slightly creaky, canopied beds. The thick curtains over the windows frame nature like a work of art. The estate’s owner, Maria, was born in this very house! Every evening, a country dinner – a kind of large buffet – is served for the guests, by the fireplace. A truly timeless experience.

A cosy night in a barrel at Quinta da Pacheca– The wine estate – which features a boutique hotel and offers tours of the vineyard – has installed ten wine barrels in the heights of the site. They have been named after different grape varieties of the Douro Valley and each converted into a bedroom complete with a bathroom, round bed and private terrace. An immersive experience for those that delight in unusual nights among the vines.

From 125 € for a double room at Casa do Visconde de Chanceleiros. From 200 €/ night at Quinta da Pacheca.

Back to nature at Les Davids hamlets
30 October 2019