Back to nature at Les Davids hamlets 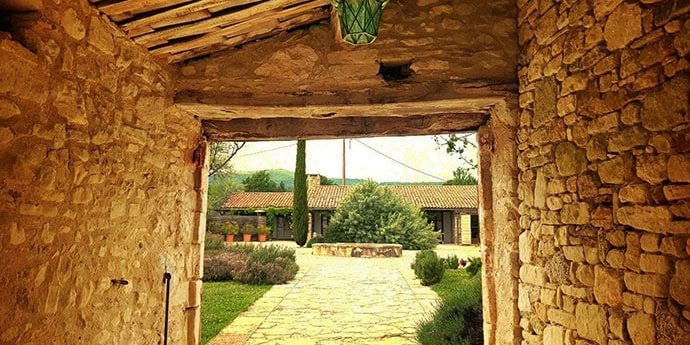 Perched on top of a gently sloping hill, the hamlet of Cournille is an impressive sight. Roses and wisteria climb the stone walls of the hamlet’s three houses, the fountain lets out its crystalline trickle, while the scent of lavender and rosemary perfume the warm Provençal evenings. Time stands still in this haunt. Welcome to a haven of peace nestled in the heart of the Luberon Regional Nature Park, just along the way from the village of Viens. Enjoy the silence …

Three houses in the middle of nowhere

For those looking for an opportunity to withdraw from the world and contemplate nature, look no further. There are three houses to choose from for your stay. The largest one has six ensuite bedrooms, two living rooms, an old-style kitchen and a beautiful fireplace. Meanwhile, the Pink House at Cournille can accommodate six guests, as can the Shepherd’s House, which is a little cosier. The stonework, the wood, the heavy curtains, the thick walls and soft beds all combine to create a homey feeling that will encourage you to let go and relax. Each house has its own private furnished terrace, with a view onto the surrounding nature. Here and there, one finds cosy little corners to curl up with a book, space to breathe, and quiet spots for meditation. Two swimming pools, and boules and tennis courts complete the Cournille hamlet. Not forgetting the spa with an outdoor jacuzzi… and in the barn, a space dedicated to event receptions also hosts yoga and fitness workshops for small group reservations in the summer.

But where’s the vineyard ?

The Cournille hamlet is only one of the five Les Davids hamlets (Les Davids is one of the four others, along with Treimars, La Madeleine and Le Luc). The fifth hamlet connects them to the vineyard. The Les Davids estate, a 120 hectare holding run according to the principles of organic polyculture, nestles in a valley a few kilometres away. Seventeen grape varieties are grown on the property’s 19 hectares of vineyard, 12 of which are used for wine production. The reds, whites and rosés are juicy, simple, and lively. There is also an extensive vegetable garden, and olive and truffle groves which provide for the chefs who transform the farm’s produce into jams and juice and rustle up, upon request, delicious dishes. The shop, which opens onto the kitchen, receives its fair share of foodies throughout the summer. Stone after stone, this natural empire, whose first foundations were laid by the Belgian Sophie Le Clercq nearly 20 years ago, continues to spread. One can easily understand why this property remains a well-kept secret among the local tourists—the dream of a preserved land is well-worth sharing judiciously.