Homes among the vines 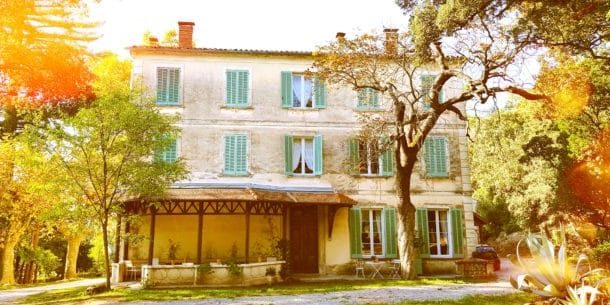 There are places where time seems to stand still. A winding lane, as it dances between cork oaks and pine trees, provides a wonderful introduction to the Château du Rouët. One, two, three… Suddenly, at the end of the path, lost among the pine trees, the view broadens, and one looks on in wonder! Beyond the gate, a plain unrolls its carpet of vegetation. A few nonchalant donkeys and horses graze languidly, lulled by the peacefulness of the place. The grass hems the edges of the château, a stone fortress divided into several buildings that appear to have sprung from the past. In fact, the century-old plane trees and the water sources protect a small, inhabited hamlet. Once a Templar farm, then a coach house, the château’s appearance today is as in the 1880s, with its park, ponds and large house with painted ceilings.

Among the vines, a world’s end

Crowned by a red ochre volcanic formation, rising to 600 meters, the 70 hectare vineyard has been tended to by the same family for five generations. At the end of the Second World War, the Château du Rouët contributed to the development of bottled wine trading and, years later, to the creation of the land’s appellation as Côtes de Provence Fréjus. Matthieu Savatier now manages the vineyard, which is listed in a protected area classified Natura 2000.

The Big House, a family setting

The Storehouse, the Studio and the Big House – set apart from the winemaking area– slumber in the vegetation. Only the melodies of the water source and small birds disturb the tranquillity. A family home built in the early 19th century, the Big House offers a sudden dive into the past. The covered terrace, its ceiling painted with an Italian fresco, leads to the door that opens onto the ground floor. Inside, one discovers a large living room with a piano, a dining room with family portraits, and a traditional kitchen… a sense of déjà vu seems to hover in the series of rooms. Without bordering on ostentatiousness, this house has something special about it. Perhaps it has a soul made of old stones and bursts of laughter.

On the two floors, six rooms can accommodate 12 to 14 people. Ancient ceramics, engravings, and antique furniture are spread cheerfully around. The sun that splashes the outside facade casts its rays on the canopied beds and soft duvets. To one’s surprise, there is even a chapel nestled in the place! It sits on curious remains: two doors recovered by the ancestor Lucien Savatier from La Belle Poule, the frigate which repatriated the ashes of Napoleon Bonaparte from the Île Sainte-Hélène.

Feel at home in nature

All windows in the house overlook a paradise. The castle park is home to huge cedars and rare tree species like a Jubaea Chilensis, a palm tree from Chile. Lounging at the edge of the ponds and fountains is a rare privilege. The pool, tucked away at the end of the garden, offers a superb view of the Rock of Roquebrune.

Whether as a family or with a group of friends, for a wedding or a baptism, the Big House of the Château du Rouët has not yet yielded to modernity.

Winegrower’s cottages: a summer in the Ortolo Valley
6 March 2020