A bed in the vineyard 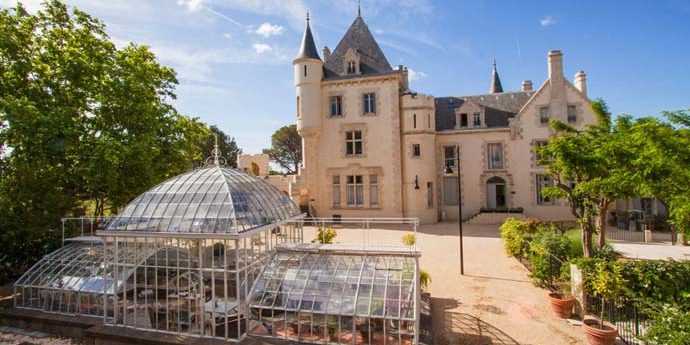 Looking from afar, it has this familiar look. Could it be a smaller replica of Gatsby manor ? The Château Les Carrasses shines like a fine pearl in the middle of the Languedoc vineyards. It’s the kind of place you want to hide from the world, just the two of you. Without your family, other people’s kids and their important number of friends who want to enjoy the Side B of the place. But what’s side B ? The huge overflowing pool, the tennis court, the petanque court and the endless summer barbecue parties. Escape from everything !
For your romantic stay at the Château Les Carrasses, chose the beginning of spring, weekdays or all the other precious moments away from the crowd.

Built during the XIXth century, this genuine « pinardier » castle was restored as a beautiful residence in 2011. The castle’s volume, its monumental facade and some details of its frame, such as ornemental doves, will remind you of other surrounding patrimonial wine estates such as the Château de l’Engarran or the Château of Flaugergues. At the Château Les Carrasses, all the outbuildings, from stables to the gardener house, have been preserved and turned into private residences revamped with a lot of style. Suites, flats or villas : visitors can choose between 28 housing options, all of them have independant accesses (even when they share the same roof). Any common features ? They all have amazing 19th century influenced furnitures, fluffy bathrobes waiting for you in the bathroom, original floor tiles, a fireplace and some of them even have a private pool. A certain vision of comfort for sure…

For us, the perfect place is the ‘Juliette’, a wonderful suite conceived as a one-bedroom flat. It has its own kitchen and a lounge area to hang out with a book. Its balcony, the only one to be that high, surimposes the terrace of the restaurant and the heated pool. From there, the horizon is a long way away and you can see our ultimate trip goal : the vineyards on display everywhere along the next 30 hectares.

The restaurant, light-flooded during the breakfast turns into a chic place in the evening. Delicious scallops marinated with pomegranate and passion fruit, squid and Bigorre black glazed pudding with seaweed or lamb shoulder cooked in its own fat for 72 hours with rosemary… pick your favorite one. Then, you just have to find the perfect wine made right here « Château Les Carrasses ». There, you can also enjoy other good vintages such as those of Bonfils Vineyard (which owns 20 vineyards in the area and around Bordeaux). The oenotheque asseses the incredible variety of wine existing in the Pays d Oc, known for its wines, its grape varieties and its unique cuvees.

Corsica: a Robinsonade at the Hameau de Saparale
3 March 2020